The founder of our Company was Rosario Di Blasi.
For our clients and for anyone who appreciates our products, here is his story as an inventor and an entrepreneur.
Mr. Di Blasi was an pilot officer of the Italian Air Force until 1946. During the war he flew three-engine SM79‘s over the skies of North Africa, Malta and the western Mediterranean.

Along with his passion for flying, Mr. Di Blasi always had a special fondness for mechanics and anything innovative.

So in 1940 he established a “Charting Rule” which is a rule to perform the necessary calculations for aerial navigation, in an era when it was still an art that was left up to the ability of the pilot.

In April 1942 the now Major Rosario Di Blasi published an article titled “Operational Diagram of a Rotary Engine” in the “Rivista Aeronautica”, official magazine of the Italian Ministry of Aeronautics. In this study, its author clearly set the theoretical base for the functioning of a rotary engine which later became known as Wankel engine. He not only indicated the advantages but also the difficulties in building it, as the various attempts of practical production had demonstrated. In February 1943, the same article was also reprinted in the German magazine “Deutsche Luftwacht Luftwissen”.

Immediately after the war, Mr. Di Blasi lived in Rome. He owned a bicycle which in those days was an important asset (recall the famous neorealist film of 1948 by Vittorio De Sica “Bicycle Thieves”). In order to not leave his bicycle unattended, he was forced to carry it into his home, on the eighth floor of a building with an elevator that was too narrow to hold it. This is where the idea came from that a folding bicycle would be much easier to transport.

By the end of the 1940’s, Mr. Di Blasi left the Air Force and began his own agricultural business in the town of his birth near Syracuse, a city rich in the proof of its important past in the Greek world.

As a hobby, he started with the idea of a folding vehicle which in the meantime had transformed into the idea of a folding scooter (remember that the boom years for scooters such as the Vespa and the Lambrettawere just ahead). From 1952 to 1956 he created prototypes of various folding scooters, all characterized by innovative solutions, such as the central freestanding hinge (because it is slightly inclined with respect to vertical), the retractable front wheel, etc.

For the curiosity of our readers, we would like to point out that the boy shown in one of the photos, with his finger in his mouth, is one of Mr. Rosario’s sons: his name is Carmelo and today he works for our company in foreign relations as well as customer relations.

Some past documentation of entrepreneurial interest regarding Mr. Di Blasi are a brochure of that first scooter and a press clipping with him at an Inventions Show at the Rome Exhibition Centre.

But the time wasn’t right to transform a brilliant idea into a production activity.

The idea of the folding vehicle was dormant until the end of the 1960’s, when it finally appeared in the form of a motorized folding tricycle (called DIBLA 7) which was also innovative in its patented solutions. It was equipped with a Zanetti engine, in those days a well known manufacturer in Bologna, and an Encarwi membrane carburettor, possibly known only to our Dutch readers. The young man in one of the photos is another of Mr. Di Blasi’s sons: his name is Carlo and today he works for our company in the production and technical areas.

The DIBLA 7 was shown at the 1968 Turin Auto Show as documented by the photo which shows Mr. Di Blasi presenting his tricycle to a then younger On. Andreotti, who was visiting the show and was then the Secretary of Industry for the Italian Government.

That tricycle did not effectively go into production, but we will talk more about it after we continue our trip through time for another thirty years.

We are now in 1973 with an innovative idea for folding vehicles. A quadrilateral hinged frame that reduces in size when collapsed.

This idea, protected by international patents, is applied to a folding bicycle (mod. Avia) and to a folding moped mod. R2: two vehicles characterized by the extreme simplicity to fold, the completely original lines and by the fact that every detail is innovative. For example, the first foldable pedals ever produced were mounted on the bicycle, pedals that were later copied by the competition. The speed and simplicity of folding these vehicles is one of the qualities that even our competitors recognize and still today remains unequalled.

These vehicles were exhibited for the first time at the Motorcycle and Bicycle Show of Milan in 1973. An unforgettable date for us for two reasons: because with that initiative our adventure as entrepreneurs began and because it was right at the time when the first important gas shortage began and consequently started the famous “Sunday’s without car” and the boom, or rather the big bang of the bicycle: All the manufacturers sold out their stocks before the first day of the exposition. Unfortunately at that exposition we only displayed two prototypes and therefore we could not take advantage of the enormous demand for bicycles.

In September of 1974, we were at the Motorcycle and Bicycle Show of Cologne (Germany) where we met who turned out to be our German importer for more than twenty years. From that moment 80-90% of our production was destined for exportation.

That first model R2 folding scooter, known in Germany by the commercial name of Paperino (= Donald Duck), has today become a sort of cult object among antique motorcycle enthusiasts. It had a single gear Franco Morini engine.

In 1979 the R2 model was replaced by the R7 model which had an engine built by us, because it was more adapted to the needs of our folding scooter, fitting a variable speed system. Therefore the R7 model had vastly improved drive characteristics over that of the R2 model.

Over the years, this scooter has been continually improved. Its possibilities of use are many: as a backup vehicle on a camper, on a boat, in an automobile, as a service vehicle for the delivery and pick-up of rental cars, etc. It has also been used as an auxiliary vehicle on board the helicopters of the Italian National Police.

The model currently in production is the model R7E.

A modern brand in development

In 2000 we began production of an innovative, patented pedal tricycle. The current version is the R32 model. We have the only foldable tricycle available on the market. It can be folded in 5 seconds with three very simple steps. It is also very simple and quick to return it to being a comfortable tricycle that is very useful for people that have difficulty using a bicycle, for the elderly who wish to stay fit, for people with mild physical handicaps or for people who simply want a different means for pedalling.

But the interests of Mr. Di Blasi are not limited to folding vehicles. The sores that formed on a family member who has been confined to bed for a long time, suggested the idea of an innovative anti-bedsore bed. It was created in 1993. It was made of a series of 18 independent elements, all easily removable and some vertically movable in order to alternatingly leave free the parts of the body subject to the formation of bedsores. The periodic interruption of pressure on the corresponding parts of the body as well as their ventilation not only prevents the formation of bedsores but allows those that have previously formed to heal more rapidly.

The future? We have many projects in the works, but for obvious reasons, we cannot reveal them. We can only say that, as always, they will be original and innovative. We can however allude only to a folding tricycle with an electric motor that has some improved upon ideas from the old DIBLA 7.

And finally for the curiosity of our readers, we show the photo of Mr. Rosario on his 90th birthday, surrounded by the employees of our company.
Mr Rosario Di Blasi died on Christmas Day 2008.

He was 99 years old but his spirit was young until the end.

The story of the life of our company, for more than 40 years in the forefront in the design and production of mopeds, tricycles and folding bicycles.

The founder of our company was Mr Rosario Di Blasi. We would love you to discover his story as an inventor and entrepreneur… 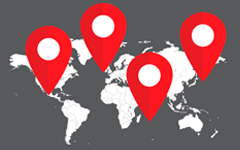